Se7en released recently his Japan EP “Somebody Else” and seems like Taeyang was a co-writer and co-composer on the title song (along with Teddy, and Kanata Nakamura for the lyrics.)

END_OF_DOCUMENT_TOKEN_TO_BE_REPLACED

When things are slow here at ATY (i.e. when Taeyang is missing in action) we tend to become nostalgic and start digging through old files for ways to fill our Taeyang fix. Hence this series of features on Taeyang’s old collaborations, starting with some celebrated sunbaes.

END_OF_DOCUMENT_TOKEN_TO_BE_REPLACED

Had to post this video clip, there’s some awesome footage of the concert in here as well as the behind-the-scenes with 2NE1, Se7en and Big Bang! Glad to see all the support he’s receiving 🙂

And the ending of the clip…..OH MY. 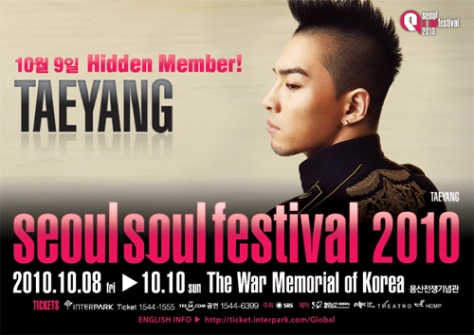 I’ve been waiting for this to be officially announced.  It’s been circulating around the Taeyang fandom that he would be a guest at the Seoul’s 1st Soul Festival for a long time now.  Normally there won’t be a whole post dedicated to a news bit, but because Taeyang’s gonna be sharing the stage with the likes of Musiq Soulchild and Sean Kingston, both really big artists in the USA,  I’m more excited than usual.  More international exposure!  Taeyang will be performing on Saturday October 9th at the War Memorial of Korea. The exact schedule has yet to be announced.

The rest of the line up includes Supreme Team (personal favorite), Se7en, Jay Park, UV, DJ DOC (!!!), and Mad Soul Child.  I hope more gets added because this is hardly looking like a ‘Soul’ festival.  How about some Lyn? Ra.D? Wheesung? Boni? Soulman?  That would be so legit.

Taeyang & Se7en have been having a lot of fun lately since they’ve been promoting together. Se7en recently put up pictures of him and Taeyang hanging out, taking some funny pictures and playing video games. I am so glad Taeyang is just having so fun being a 23 year old dude~

END_OF_DOCUMENT_TOKEN_TO_BE_REPLACED

We all know Taeyang is #1 in our hearts but recently Gummy ranked the YG men based on their charms and our little sunshine was #4. Check out the video and translations below!

What she said about Taeyang:
“4th place is.. Taeyang. Taeyang only likes music too much! He’s actually really fun, to tell the truth. You would think that he’s not as fun, because all the other members are so outgoing, but actually if you get to know him, he’s really hilarious.”

YG’s recent announcement on various news portals indicates the man has YET AGAIN revealed new plans for his artist. Yeah, yeah, I know. How many times have we rolled our eyes at yet again ANOTHER announcement, only to find out months later they’d be changed~ lol seriously YG, you just set yourself up for mockery. Okay, enough of my ranting, I am stoked he spoke about Taeyang’s solo album though – FINALLY!

As YG said ” Big Bang did not release any albums this year, they will be releasing two mini albums – one in the summer and then at the end of the year” he also said, “before though, Big Bang’s Taeyang will release his solo album”

We all know that YG is a master at changing plans, before TOP and Daesung were suppose to release solo albums this year, however I guess things have changed because now the plans look like Gummy will be releasing in May, followed by Se7en in June, 2NE1 will be coming back in the summer, somewhere in there we’ve got our boy Taeyang, then Big Bang all through the rest of the year – THAT is one crazy YG year. My only worry is, will Taeyang get the time he needs to do PROPER promotions for his album?

So, personally, I would have hoped for a little something more, considering this is the LAST “From YG” letter Mr.YG has decided he would be doing. He will not being doing these “statements/updates” anymore due to the misunderstandings that tend to arise with them (ie. promising Taeyang fans an album and then the massive delay that has followed). Anyway, here’s the snippet where YG speaks about Taeyang’s album…..

Plans for YG Singers’ Album Releases
As all you fans will know, we predict the album activity of YG singers to be busier this year than any other previous years, but for the last few months it is true that there has been a lot of delay due to the moving of company buildings.
Though I can’t give exact periods for album releases, in the first half of the year we plan to release the albums of Se7en, Taeyang, Gummy and 2NE1, while in the second half, from summer to the end of the year, Big Bang’s domestic activities as well as a new 2NE1 album and solo activities of TOP, Daesung and Seungri are to be expected.

You can read the full letter here

What do you guys think, is it fair Taeyang is going to be releasing with other YG artists and big comeback names in Kpop? Should Taeyang have released earlier as intended?

Seems like he only sang Wedding Dress – I’ll post up Where U At, if he performed it =)
He’s awesome….AS USUAL.

And a little backstage Tae-Se7en lovin’

^ looks kinda poshopped to me, but both TY and Se7en were performers at GD’s concert~ Sexy doesn’t even begin to described these two ~lol.

The sexy YG men recently went on a trip to …..oh well who cares, they went somewhere and took pictures of themselves half naked. Ladies (and some Gents)…fan yourself.

Might I say, Taeyang looks super adorable in this picture and I can see a faint outline of his abs (~yess). On the other hand, it’s great to see Se7en in the mix and of course dork Kush. I won’t comment on GD except that the boy needs to eat more rice ~

Check out the rest of the post for a Taeyang TV snippet….
END_OF_DOCUMENT_TOKEN_TO_BE_REPLACED