Personally, this article is almost perfect.  Stunning photographs, my favorite yet, and again, a very genuine interview and sorta funny at the same time.  I felt like the writer was both praising and laughing at Youngbae at the same time – praising him for being so focused on music and giving it 518% (hehe) and laughing at him for pretty much having no life because all he can think about, talk about is his music.  However, I can confidently say that the media (journalists and critics alike) adore Youngbae after reading pieces like these.

What would it be like if Taeyang of Big Bang did not exist.

It may be something fans don’t even want to [imagine], but in order to evaluate Taeyang’s true value, such a method may be effective. Even if Taeyang didn’t exist, Big Bang probably would have been one of the best pop groups like they are now. Because the remaining members have their own talents and personalities, and thanks to strong training, they would be lacking nothing to continue receiving the fiery love of their fans.
But if Taeyang did not exist, Big Bang’s heavy presence could have been lighter than it is now. Big Bang’s singular existence is that though they are ‘idols,’ they are also recognized as ‘artists’, and the member who is in charge of a significant portion of this ‘artistry’ is Taeyang.

The reason this is obviously that Taeyang shows us an exceptional ability in song and dance. But in addition to his musical ability that can be summarize him as an ‘artist,’ there is another key factor that makes him the alpha plus of Big Bang. And that is sincerity. 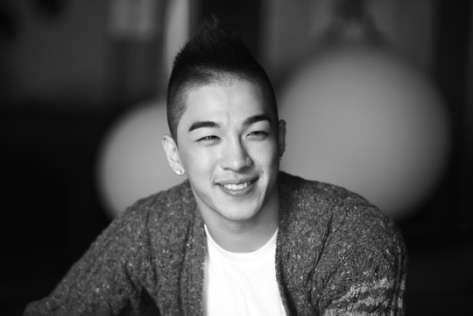 Taeyang clearly shows us musical and human sincerity that is difficult to find in a member of an idol group and singer in his early twenties. We can [see] this sincerity musically [in the continuous worrying over] wanting to show a better and fresher image through his solo activities, and humanly through his prudent and modest [humble] thoughts and actions.
We met Taeyang. It was during the time when his solo album did almost surprisingly well on iTunes charts overseas and he was getting ready for his second solo concert (September 25 and 26, Seoul Hall of Peace) after releasing his international album. Though the interview was filled with sincere talk about music, there was also some silliness, like how he began the interview by appearing from behind the sofa where he had been hiding with a bright smile.

Taeyang’s interview continued with some [serious and stern] conversations. It was Taeyang who made it that way. When asked a question about his achievements and his high-scoring musical ability, he simply gave us modest answers. Even though it’s accepted that when celebrities are asked questions about themselves, they sugar coat their answers to some degree, Taeyang did not do so.

When asked what he thought about doing more aggressive promotions overseas with the basis of his success on iTunes, he said, “There’s nothing special. Other than releasing an international album because my solo album did well on iTunes, there’s nothing special planned. We’re just going to get out there slowly, one step at a time.”
When asked about his performance of motions and facial expressions that [unfolded] quite naturally as if we’re watching a musical in his recently promoted song ‘I’ll Be There,’ he answered, “It’s not to the point where I should be receiving compliments. I just try hard to express myself naturally according to the music without practicing my acting on the side.”
He says that he is lacking in so many things even though he is being acclaimed that his musical ability surpasses that of an idol. “I’m lacking a lot. Musically, I think that I have to find a lot more areas where I can directly incorporate my own color, and on stage I think I have to be able to show an image that’s more relaxed.” 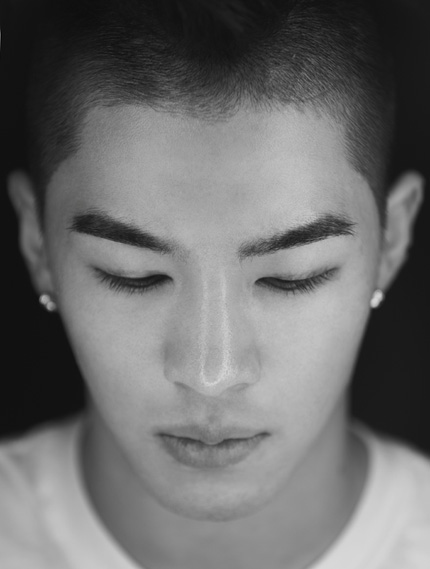 He continues to give us [humble] answers. He says that he doesn’t really show his Big Bang friends the music that he had been working on for his solo album. The reason is because he is “too shy…” When asked about his secret to digesting both song and dance together, he says again, “I’m still lacking a lot. There’s nothing special. I always exercise whether or not I’m doing promotions. So that I don’t run out of strength on stage. And because the facilities at the office are so advanced, I always grab a mic and sing live whenever I practice the choreography.”
But no matter how modest he tries to be about his musical greed and how much he tries to hide it, he can’t help but let it show. He has a lot of thoughts about writing lyrics. “There are a lot of dating stories in my songs and in most pop songs. But I want to write lyrics that reflect the generation, about society and people. Stories about ‘relationship’ or society’s ‘issues.’”

Talk about music has no end, but we were curious about ‘human’ Taeyang so we changed the direction of the interview. We asked whether he’s jealous of the other Big Bang members. And what he thought made him better than the others. “Jiyong has the sense to accept new things, Daesung is bright and sociable, Seungri has confidence, and TOP is charismatic and stubborn… Me? I’m careful (laughs).” Taeyang is in charge of(?) Big Bang’s caution. [Meaning Taeyang is in charge of being the worrywart – telling Big Bang to have some discretion be cautious.]
We asked whether he would change his hairstyle, which he’s had for quite some time. “I want to change it. But I don’t have that kind of time. If I want to change something, I have to do it with a comeback after going on a break, and I would need time to study and find a new style, but even if I didn’t have promotions in Korea, I have promotions in Japan and other places overseas, so I don’t have any time to change it.”

After seeing such a serious side of Taeyang, we wondered about his other sides so we asked if he ever spends his time being silly. “There are times when I am silly. If there’s a closet in our waiting room or something, I go inside sometimes. The people around me now understand this kind of humor of mine.” He told us about the time when he was in the middle of filming a music video when he ran away from set in full makeup and costume, and took a bus back to the office.
After talking nonstop about music, Taeyang found difficulty with questions that required a funny story or funny answers. The image of him saying, “Ah, I can’t think of it right now,” making a pained facial expression, and striving to think of something was very Taeyang-like. It seemed as though Taeyang doesn’t keep much in his head other than things that have to do with music.

57 thoughts on “Taeyang, “I want to change my hairstyle but I have no time””